Skip to main content
Back to Stories
Article·January 9th, 2012
The Promise of God’s “Alternate” Community 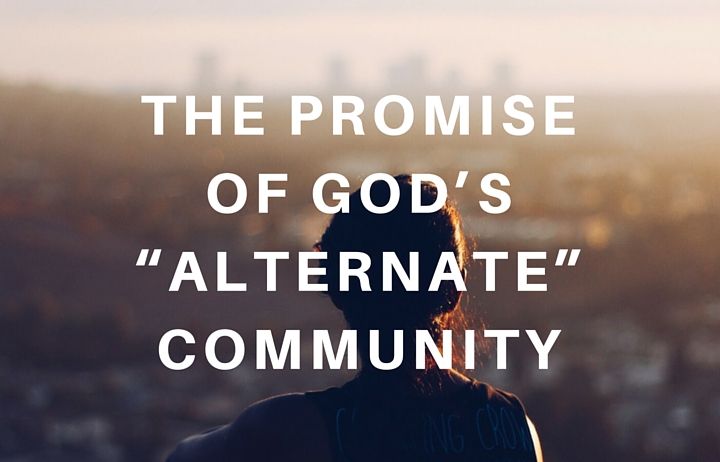 The Promise Of Genuine Community

In Luke 6:12-36 (emphasis 6:12-16), Jesus lays out truths that, when planted into the hearts of our members, will transform and shape our understanding of genuine community. This passage begins by revealing Jesus’ promise of a genuine community. The church is a community of disciples of Christ. In this passage, Jesus calls 12 disciples, and subsequently takes them to a mountain to teach them. This is reminiscent of what happened when God called the 12 tribes of Israel to another mountain (Sinai); in Exodus 19, God tells His people, “I carried you on eagles’ wings and brought you to myself. Now if you obey me fully and keep my covenant, then out of all nations you will be my treasured possession (Exodus 19:4-5).” In other words, God rescued His people from slavery, and then He brought them to a mountain to give them the Law. In the same way, in this passage, Jesus calls His disciples first, and then brings them along the mountain to teach them. Why does He do that? Why is it that Jesus teaches them about obedience after He calls them? Here’s why: if the Bible or the Christian life were merely about obedience to God in order to be acceptable to God (in order to be called or chosen), then the teachings would’ve come first, and the calling would’ve been the result for the select few who succeed. That is not what happened, however, and it makes all the difference between a Christian and just another religious person. The purpose of the calling followed by the teaching is to build genuine community. In the Old Testament, God did this out of His desire to make His people into a nation (Exodus 19:6), and here, in this passage, Jesus does the same in Luke 6:12-16. Thomas Cahill, notable American scholar and writer, wrote a book called The Gift of the Jews, in which Cahill describes that, before they escaped Egypt and entered the promised land, the Israelites were a collection of nomadic tribes wandering the desert. However, once the Law was given to them at Sinai in Exodus 19-20, Cahill implies that this nomadic tribal community became a nation, and revolutionized the world with their monotheistic values and their systematic moral culture. This people of God would be empowered with His values and His consistent laws. Another way of reiterating the point: what distinguishes two nations from each other? The answer is simple: a nation’s cultural and societal “laws” make up its people. Laws define a nation. Therefore, Jesus calls His people together, and subsequently teaches them what it means to live according to the values of this new society.

The “Alternate” Community: Christianity Versus “Religion”

The difference between religion and Christianity, thus, are like two diametrically opposed nations. A religious person sees obedience to God’s Law as a condition for God’s acceptance and security; you have to obey in order to be loved by God. The Christian faith, however, is the opposite of religion, altogether, then. The very essence of the Christian faith is the belief that there is nothing anyone can do to earn God’s acceptance on the merits of their own obedience or works. God’s love is founded on the perfect record of His own Son Jesus Christ, who lived the life that we should live, and then received the punishment of sin that we deserved on the cross. A life of faith in Jesus is a life of dependence on God’s calling (which means, a daily struggle and fight against trying to earn our salvation), and submission to His values and laws as the Spirit of God shapes us into the likeness of Jesus. Any other type of obedience would be conditional—a struggle to obey in order to “get something” in return from God. When Jesus calls you, you enter into a new relationship with God; it’s unlike any other relationship you have because of its perfect foundation of grace and truth. However, when Jesus calls you, you enter into a new, alternate community as well. You are a citizen of a new society—founded on the same transforming grace and truth.

The Possibility Of Genuine Community

This lies at the heart of genuine community. Look at the names of disciples listed in Luke 6:12-16. Among them were fishermen, tax collectors, and noblemen. Some of them lived in larger cities, while many came from provincial towns. Some were educated, while most were uneducated. Some were “easy believers”, while others were empirical “skeptics”. In other words, Jesus didn’t call just the rich or royal, nor did He focus solely on the poor or marginalized. He didn’t just call the spiritually “simple”, nor did He just call those who were theologically adept. Jesus drew them all—they equally followed Him, they equally “missed” the truth of the reality of who He was, and they equally abandoned Him at His arrest and death. After His resurrection, those who understood the Gospel, were equally embraced and reunited again. The Gospel transcends race, ethnicity, culture, societal “rules”, gender, age, political leaning, and socio-economic status. Why? At the heart of the Gospel, Christians believe that it cost the infinite stepping into finiteness—sacrificing His desires, wealth, power, and honor, in order to make His people into a nation. Trusting in this personally removes any hint of pride or defensive need for self-worth. We can genuinely love others—regardless of race, class, wealth, etc., because we do not have to compete with others for God’s love. It is offered and abundantly given to us on the basis of Jesus’ perfect record. Metro Presbyterian Church does not seek diversity out of a need to “do something different.” We welcome diversity (and is intentional in its practice) out of a practical desire to appreciate the Gospel at work in our community—to experience the thrills, commitments, challenges, realizations, reminders, and calling of the Gospel that so deeply transformed our people. We invite you to test, participate in, and embrace the various facets of genuine community that the Gospel empowers here at Metro Presbyterian Church.

Invitation To Visit Our Community

If you are interesting in learning more about our values and what it means to “walk” with us, please feel free to contact us anytime. We look forward to sharing about the exciting things that the Lord is doing in our community through Metro Presbyterian Church.