Skip to main content
Back to Stories
Article·November 7th, 2013
What It Means To Remember 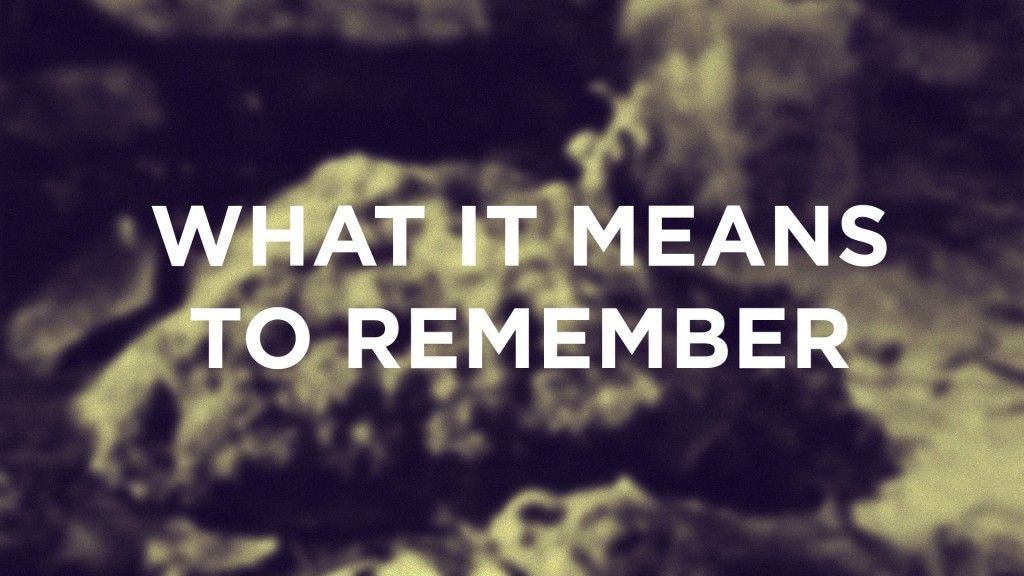 1 When the whole nation had finished crossing the Jordan, the Lord said to Joshua, 2 “Choose twelve men from among the people, one from each tribe, 3 and tell them to take up twelve stones from the middle of the Jordan, from right where the priests are standing, and carry them over with you and put them down at the place where you stay tonight.”

4 So Joshua called together the twelve men he had appointed from the Israelites, one from each tribe, 5 and said to them, “Go over before the ark of the Lord your God into the middle of the Jordan. Each of you is to take up a stone on his shoulder, according to the number of the tribes of the Israelites, 6 to serve as a sign among you. In the future, when your children ask you, ‘What do these stones mean?’ 7 tell them that the flow of the Jordan was cut off before the ark of the covenant of the Lord. When it crossed the Jordan, the waters of the Jordan were cut off. These stones are to be a memorial to the people of Israel forever.”

8 So the Israelites did as Joshua commanded them. They took twelve stones from the middle of the Jordan, according to the number of the tribes of the Israelites, as the Lord had told Joshua; and they carried them over with them to their camp, where they put them down. 9 Joshua set up the twelve stones that had been in the middle of the Jordan at the spot where the priests who carried the ark of the covenant had stood. And they are there to this day. – Joshua 4:1-9

The reason that the Israelites did evil and served idols in the book of Judges was because “they forgot God”. It does not say “they forgot about God”. This was why many writers of the Old Testament often wrote to remind us that we are to “remember our Creator”. Surely, they were not trying to convey to us that God’s people had a lapse in memory. They knew their history; they knew where they came from; they knew God existed, and they knew what He meant to them. But in the Bible, “remembering” and “forgetting” carries much more spiritual significance. The Psalmists prayed that God would “remember not” our sins; surely, they were not asking the Lord to have a lapse in memory, either. What did they mean when they called us to “remember”? To “remember” God is to act on what you know—to live out what you believe. The root of all of our problems, then, is that we continually “forget” in our hearts—in any circumstance, the Gospel (what Christ has done for us). This is what Joshua did to address the problem (in Joshua 4): Joshua creates what he calls a “memorial” (Joshua 4:1-7). The Israelites were on the brink of entering the Promised Land. Moses was no longer their appointed leader. Forging the river Jordan could result in disaster. The journey to the Jordan was treacherous. Joshua, however, believed God and His promise to deliver His people across the river; surely, the Lord would not just rescue His people throughout the journey, but He was present in the journey itself. Fording the river was literally a crossover from death to new life. Thus, the memorial. Twelve stones from the middle of the Jordan were to be carried—each by a member of the twelve distinct tribes of Israel, used as concrete, vivid reminders of how God led them into the promised land by sheer grace. They did not build a bridge on their own to get there. They did not fight their way to get there. It was, simply, a miracle—an act of grace. These stones were to be erected into a memorial on the other side, so that when the children inquire of them, the Israelites would be able to look on the memorial and tell their story. Joshua insisted that families, as they go by this memorial, are to tell this salvation-story over and over. The twelve stones represented the twelve tribes; the twelve tribes represent the whole of God’s church. Do you believe that God’s character and promise are sufficient for all time—for you? What is our assurance that God would be just as faithful to us, personally and corporately? Centuries later, Jesus, at the Last Supper with His twelve disciples, took the bread and the wine, and similarly insisted, “Do this in remembrance of me.” Why? Knowing what would happen soon after the Supper—the cascade of events that would lead to the cross and His death, Jesus called on His own disciples to consume and digest the bread and wine that would represent His body and blood. They were called to take it in, and let Christ’s own body and blood (His death) be the source of their nourishment and strength. Anything we consume acts as a source of power for our bodies; Jesus was saying this: “My body broken and blood spilt will be the source of power for your souls—you must first consume (remember) what I had done for you, and let that truth shape and transform your soul to the core.” Jesus would become the Bridge; Jesus would become the Way; Jesus would fight the battle on Calvary and win. Salvation isn’t by anything we’ve done—neither our moral record, nor even our devotion to God earns our way across from death to life. Jesus is the miracle, and the cross is our memorial upon which we miraculously cross over into God’s promise. Joshua’s memorial was intended to be a community observance; the same goes for the Lord’s Supper and the cross—these are tangible “reminders”—they help us remember who Jesus is, and what He graciously accomplished for us. The Lord’s Supper is to be taken as a community because we are called to remind each other. Through community, we focus on sharing, building, encouraging, gathering, and remembering—to increase the dimensions in which we come to know the Gospel. I worry a lot about a lot of things—it is a natural reaction to changing circumstances, discomforts in life and ministry. I worry personally about having children, the future of my ministry, my current employment situation, family members, those I come in contact with daily in our journey together as a church, and as a people-pleaser, I naturally worry about what people think of me—how draining and foolish! How quickly I forgot the beauty of Christ, and the beauty of His work on the cross, which gives me a lasting confidence; this was why the author reiterates Joshua’s command, and the Israelites’ meticulous obedience of his command, in the text described above. When the Gospel takes hold, we obey and act on our trust. My prayer for tomorrow—for our community—is that as the days progress, our trust—our memory, will sharpen.