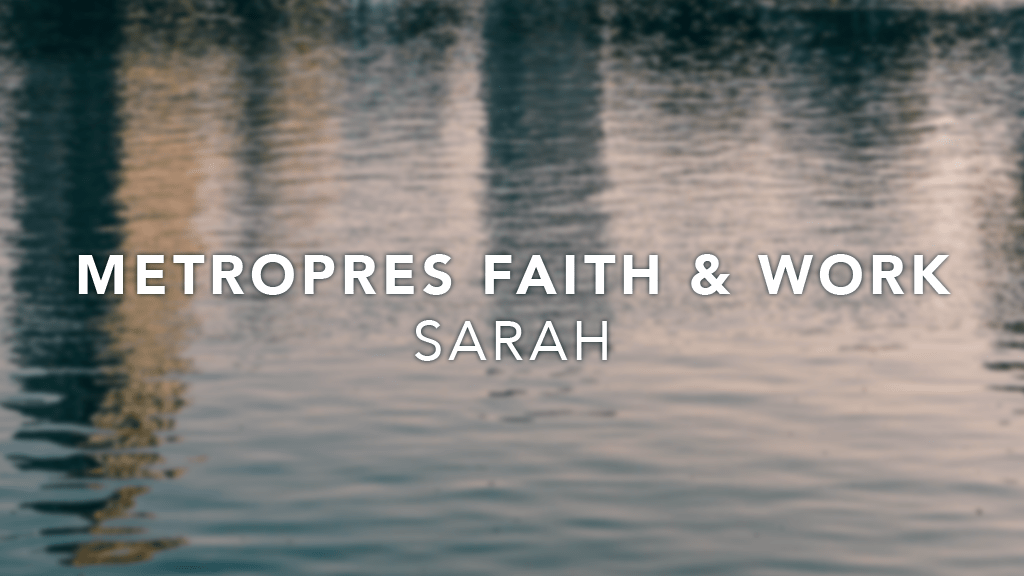 Work had become the platform to indulge my need for approval, recognition, and security.

During the week, the majority of my waking hours are spent at work. And for the longest time, I never really considered how my faith plays out in my workplace. I had convinced myself that faith happened outside the workplace, that ministry happened after my 9-to-5, and that ultimately, my heart’s sinful responses didn’t matter at work. I was blind to my sinfulness and how it penetrated every aspect of my life. I believed that who I am and what I did at work didn’t really matter when it came to where I was in my faith. At the same time, I used to judge people who were consumed by their work — those who became so work-obsessed that all they thought of and talked about was their occupation; to the point that that was all they were. That was, until I realized that at the core, I had become the work-obsessed person. Work had become the platform to indulge my need for approval, recognition, and security. When I worked hard and performed well, I was approved and recognized by my coworkers and supervisor. But one good review, one promotion, was never enough. I needed to continue feeding my idolatry — ultimately requiring me to pour more of myself into my work. I failed to recognize how my sin played out at work. I later realized how much my heart was self-deceived into thinking that it would never rule me.

What I described above is best illustrated by something that happened to me at work about a year ago. While working with one of my customers, I made a mistake that could have potentially cost my company millions of dollars. While the full impact was being accessed, my heart was full of anxiety and panic. I was so quick to assume the worst and I grew devastated at the potential of what I could lose even though my boss never yelled at me or showed any disdain. It wasn’t just about losing a client or losing a job even, but it was the loss of approval, the loss of favor, and the loss of security that really devastated me. In the end, by God’s grace, there was no real impact, no real material cost, and my coworkers and supervisor continued to be gracious and forgiving. However, for months after, I still figuratively hung my head low in shame because of what I had done. My record was no longer clean and the realization that people around me knew I could fail stayed with me. My mistake was pretty bad, but it wasn’t anything close to being the worst thing that could have happened. But when my heart is ruled by something other than the Lord, my perception of reality becomes distorted. Mistakes become devastating, guilt and shame persist, and ultimately, what I’m putting my faith in is revealed.

It wasn’t until I starting seeing those truths that I began reconciling how my faith plays out in my work. In the creation account in Genesis, we see that the call to work (“be fruitful”) existed even before the fall. When I first learned this, it blew my mind. This taught me that my work is important because I was created to work, to create, and to be productive. This truth means that the answer to a work-obsessed culture is not to be dismissive of my vocation or think that it doesn’t matter. But later in Genesis 3 we see that because of sin, work became cursed and now we live in the brokenness of that reality. Therefore, I find myself attaching too much value to my work when I allow it to be more than it was intended to be (i.e. a means to find my worth/approval). Work becomes another vehicle that reveals what’s really ruling my heart, and I need to pay attention to that.

So the question is, how do I live a life where I am faithful to my call to work while not allowing my work to define me? The answer to that is still a work in progress for me — a process that I am still working out. But what allows me to reconcile the two is to reflect on the work that Christ did for me on the cross. In John 17:4 Jesus prays and says, “I have brought you glory on earth by completing the work you gave me to do”. Jesus’ calling to earth was to work and bring our redemption and salvation. Therefore, his death on the cross was the ultimate culmination of the work he was called to do; which is why he cries out, “It is finished”. Jesus worked and lived the life that merited Him all of God’s approval, favor, blessing, and righteousness and died the death that we should have died to pay the debt of our sin. What cost Him everything, costs us nothing. What that means for me is that the approval I’m seeking and working for is already found in my standing before God – because of Christ, I am approved. I no longer need to turn to my work (or anything else) to find that approval or a sense of worth. Even more, I can pursue a life that is more in line with who I was created to be. We were designed to reflect God’s image, and even though the reflection may be broken, I can live a life with purpose and a specific calling. I can return to the call to “be fruitful”.

Everyday is a battle, but I’m thankful for reminders through Metro and through the community here. There are people here who have walked with me through complaints, mistakes, and job searches, yet, bring me back to what’s important and how the Lord is working in and through all of it. There are people here who remind me to take a step back and call me out to lunch in the middle of hectic work weeks. And there are people here who know when to call me out and address my idolatrous heart yet also spur me towards repentance. I am thankful that the Lord has brought me to this church and has surrounded me with people I trust to do life with for years to come.