Skip to main content
Back to Stories
Metro Stories Series·April 24th, 2017
Be Thou My Vision 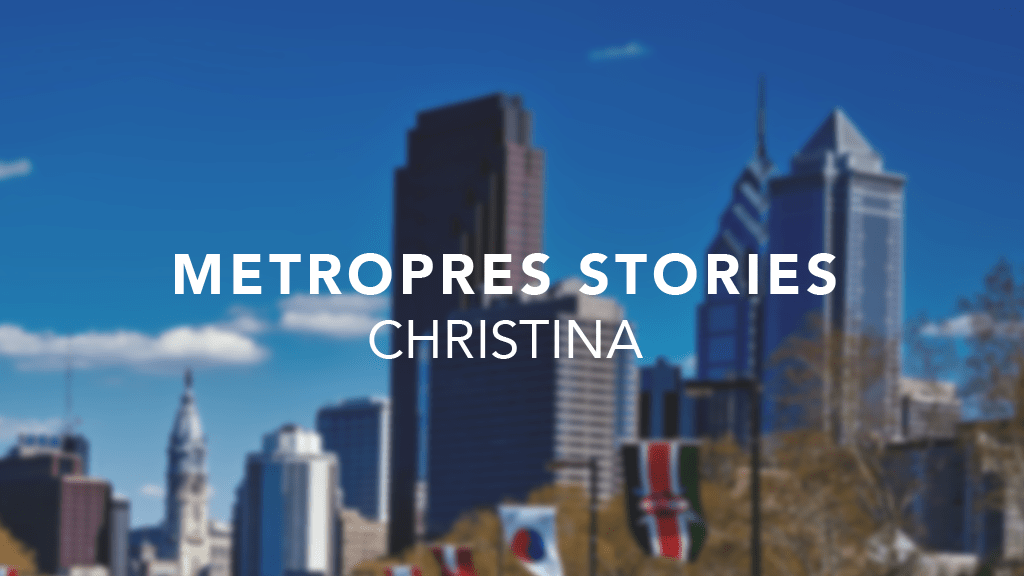 I began to see that if Jesus isn’t my Lord, then something else will always be my Lord.

Last summer, amidst personal fear and doubt, I followed a conviction to move back to the city of Philadelphia. The conviction, however, was fairly recent. Up until then, I still believed I was meant to work and reside in New York City as I had been doing for the last 8 years. Ever since I was young, I had a one-track mind when it came to my pursuit for artistic expression. Whether I was drawing in elementary school, painting in middle school, or dancing in high school, self-expression was a deep value of mine that seemed to steer the course of my life. Even when my parents sent me to a liberal arts college hoping to force other options, I still found a way to do exactly what I wanted. I joined a college dance team to keep me busy by day as I continued to work on my art portfolio by night. Once I successfully transferred into Parsons School of Design, I said to myself, this is it. This is where my affinity to the arts will be guided by the opportunities before me. So I worked tirelessly to seize each and every one. Through some of the longest semesters of 9am-9pm classes, 3-days-a-week internships, and online courses to occupy my weekends, I quickly realized the depth of my hunger to succeed. The value of self-expression I once enjoyed was now something I gripped onto as a means of defining my worth. Specifically, in how I succeeded in the fashion industry.

Once I graduated and began working, this idea of success became more and more illusive. I spent long nights alone at Calvin Klein, setting up for market week until 2am. I worked until 6am at Balenciaga, finishing a project for the Executive Team in Paris. I called an Uber home to take a quick shower, only to return in a few short hours. I watched the senior members of my team be excellent at their jobs, and hoped for the day that I would get to call the shots, yet equally afraid to know what else I’d have to give up in order to make these dreams a reality. I felt as though I was “making” it, and yet, I knew I was “losing” myself. F. Scott Fitzgerald, author of The Great Gatsby, put it best when describing the natural tendency, the vicious cycle, of the human heart: “There must have been moments even that afternoon when Daisy tumbled short of his dreams—not through her own fault, but because of the colossal vitality of his illusion. It had gone beyond her, beyond everything. He had thrown himself into it with a creative passion, adding to it all the time, decking it out with every bright feather that drifted his way. No amount of fire or freshness can challenge what a man will store up in his ghostly heart.” The more I saw how much I identified with these values apart from God, the more I was challenged to confront my identity as a Christian. Yes, I believed in Jesus. Yes, He died for my sins. However, my functional identity and sense of worth was still deeply centered on the rise and fall of my self-image. Jesus was my Savior, but He wasn’t my Lord.

By God’s grace, I remained rooted in my Gospel-centered community here in Philadelphia. This spurred me to root in one while in New York. It was through these relationships, built over years, that seeds were planted and the Gospel sank deeper. And at the right time, I came to feel its growing pains. For example, after years of traveling back and forth from one city to the other, I eventually felt called to choose a community to root into for the long haul. The one thing holding me back was the cost of giving up my worldly dreams in the process. Needless to say, it felt like death, and as a result, I frequently meditated on Mark 10, a simple devotion shared by Pastor Donny years earlier. In the text, a rich young ruler walks up to Jesus and asks what he should do to inherit eternal life. Jesus replies, “Go, sell everything you have and give to the poor, and you will have treasure in heaven. Then come, follow me.” Although it was easy to get stuck on what I thought God was asking me to give up, the text preceded with, “Jesus looked at him and loved him.” This man was so blinded by the grip of his wealth, his earthly identity, that he couldn’t see who he was walking away from: True Riches. Not only that, Jesus loved him and empathized with him because he, the ultimate Rich Young Ruler, would later experience what it’s like to give up unequivocally more—his life, his wealth, his worth, his identity, and his relationship with his Father—to free those like this man, those like me. I began to see that if Jesus isn’t my Lord, then something else will always be my Lord. Anything I value above Him, or place as my identity apart from Him, is really as Scripture says, a cancerous idol only He could remove. Moving to Philadelphia, for me spiritually, was one of the hardest decisions of my life, and yet the most freeing.

I took a leap of faith and quit my job before finding a new one, and yet God provided me with a new position in an entirely different industry, allowing me to plug into the community at Metro seamlessly without burden. I’ve always been drawn to Metro, ever since its inception several years ago because of its unwavering values and vision rooted in the Gospel. Now that I’m here, I know that I have much to look forward to as I’ve already seen the fruits in plugging into the lives of those drawn to the same things. I am freer to be exactly who God designed me to be, and my capacity to know and love Jesus as my Lord and Savior has only flourished, ever increasing my satisfaction, my rest, and my joy in Him. I know that I’ll always be able to look back on this chapter of my life, specifically my 20s, and plainly see how God was working everything together for my good and for His glory. Lastly, when I say that God is faithful today, I can say it with weight, not because of what it cost me, but because I know now—with a greater intimacy, a deeper love, a higher trust, and with abandon—what it cost Him.

“But whatever was to my profit I now consider loss for the sake of Christ. What is more, I consider everything a loss compared to the surpassing greatness of knowing Christ Jesus my Lord, for whose sake I have lost all things. I consider them rubbish, that I may gain Christ and be found in him, not having a righteousness of my own that comes from the law, but that which is through faith in Christ—the righteousness that comes from God and is by faith. I want to know Christ and the power of his resurrection and the fellowship of sharing in his sufferings, becoming like him in his death, and so, somehow, to attain to the resurrection from the dead.” Philippians 3:7-11